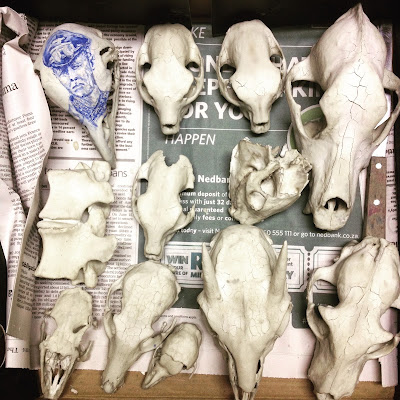 The Singing bones series of works are literally fossils, produced through dipping and coating found and collected animal skulls and bones in a customised porcelain (china) slurry. The coated skulls then go through a process of firing that ‘releases’ the bone remains, leaving behind the ‘porcelain jacket’, and some residual bone matter: rendering the pieces as bone china. The title 'Singing bones' is a reference to the life stories that bones bear witness to. Further to these animal stories, I add a palimpsestual layer of populist, historical, and mythical human narratives. The characters painted onto the skulls tend to suit the type of skull, for example pairing a raptor skull with a soldier, and small-time gangster’s face with a small herbivore skull. The subjects tend to be compromised and complex anti-heroes, whose circumstances shaped their existence, much like the bones. Bones are elements of divination in many shamanic cultures, telling stories. These bones tell (sing) multiple stories: that of the animals that once ‘clothed’ and inhabited them, the human stories they have become surrogates for, and the ineffable fate of all who view them.
Posted by Ann-Marie Tully at 03:34