Where to find me going forward ... 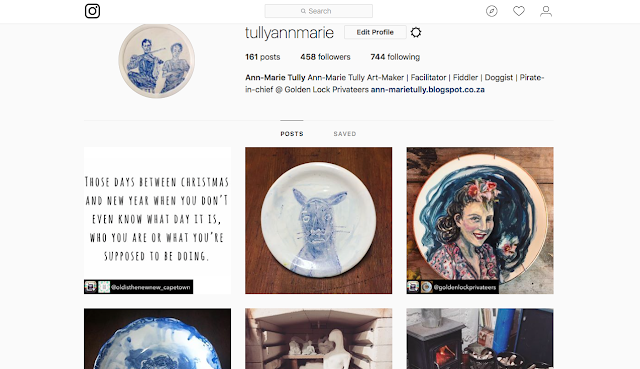 A golfer called Walter Hagen apparently said, 'You’re only here for a short visit. Don’t hurry. Don’t worry. And be sure to smell the flowers along the way.' Well thats certainly easier said than done in this crazy crazy world, but the moral of the story is a good one. In the interests of smelling more daisy, I am streamlining my social media activities going forward. While this blog will still be in use on occasion, you can follow regular updates of my work and happenings @tullyannmarie on Instagram https://www.instagram.com/tullyannmarie/

See you there!
Ax
Posted by Ann-Marie Tully at 04:16 No comments:

The overarching title of these works, ‘Picking Bones’ refers to a body of work that employs bone china crockery - associated with the decorative and culinary arts - as a oil painting substrate. The title, ‘Picking Bones’ stems from the English Idiom, ‘I have a bone to pick with you', meaning that there is a matter, or ‘bone of contention’ to be dealt with. The reference to bones also refers to the use of bone ash in the bone china slurry; while also being a reference to the mix of antiquated subject matter: mythological, classical, cultural, and historical - depicted in a linear fashion on the up-cycled ceramic relics. The word ‘picking’ can be construed as a reference to the appropriation of iconography from sources ranging through the classical and art historical, photographic sources, and much else. The rendering of these ‘grand narratives’ on quotidian wares is an ironic gesture that transforms the ‘grand’ to decorative, and the quotidian to art.

The title and subjects of the below works, ‘Kore’ is related to the Greek word for ‘maiden’. It is also the name given to a type of free-standing sculpture of Greek antiquity depicting female figures. ‘Kouros’ are the male equivalent. Both gender examples exhibit an often stiff and upright countenance, and what has been called an ‘archaic smile’. The male figures are mostly nude, while the female ‘kore’ figures are often depicted dressed in ornate drapery and braided hairstyles. My ‘kore’ studies draw their iconography from a more recent Greek artist: Vasso Katrakis (1914 - 1988). Katrakis was known for her unique engravings and contemporary Hellenic style; as well as her anti-war and anti-fascist activism. Her subject-matter ranged through engravings of everyday people and landscapes, to socio-politically charged representations of the difficulties of the Greek people in the postwar period. Her midcentury representations of young Greek men and women are particularly striking in my mind - exhibiting an exceptional control of line and physical expression. These ‘Kore’ are my homage to this exceptional Greek woman and artist. The rendering of these ‘visual nods’ on china and ceramic platters, and trays can be viewed and an ironic gesture that transforms the ‘grand’ to decorative, and the quotidian to art. These works were part of the exhibition accompanying the annual George Bizos Bursary Fundraiser at Saheti School Johannesburg. 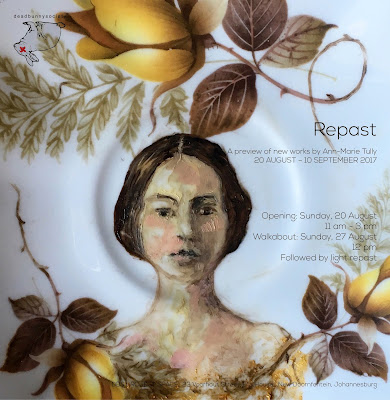 Repast [ri-past]:
[Noun] A quantity of food taken or provided for one occasion of eating; the time during which a meal is eaten, a mealtime.
[Verb]: To eat or feast (often followed by on or upon).
The title repast refers in this showing to a body of work that both encompasses mealtime crockery, and ceramic media, associated with the decorative and culinary arts. Repast constitutes a meal of visual-thinking-in-theworld, drawing on contemporary, mythological, cultural, and historical instances. 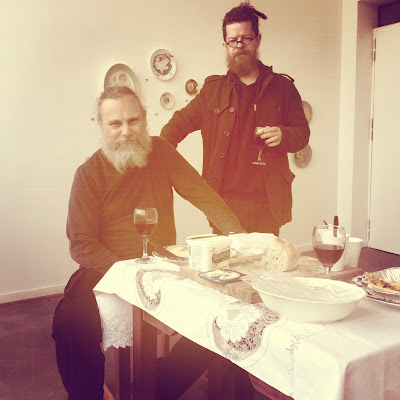 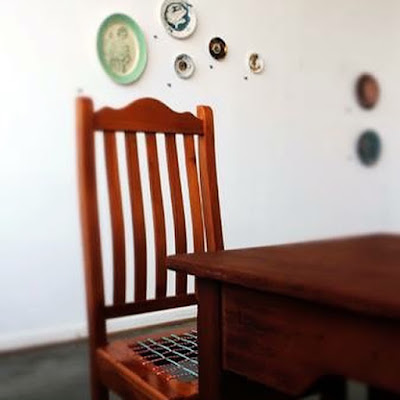 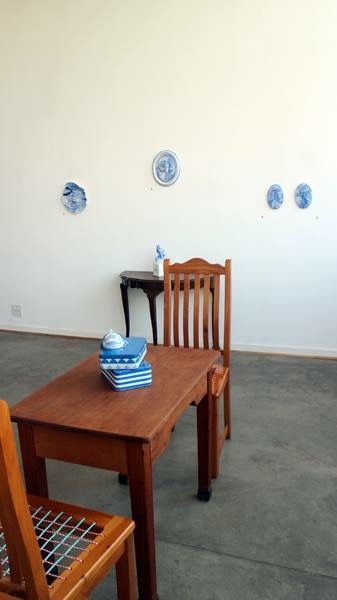 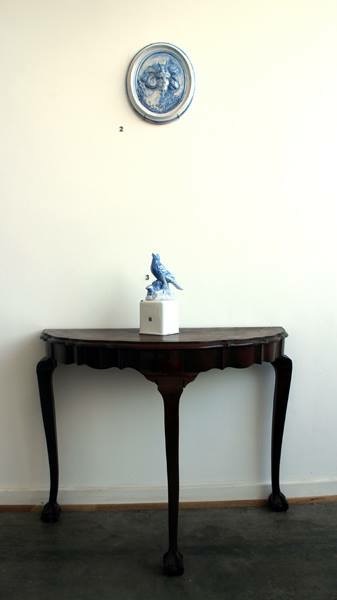 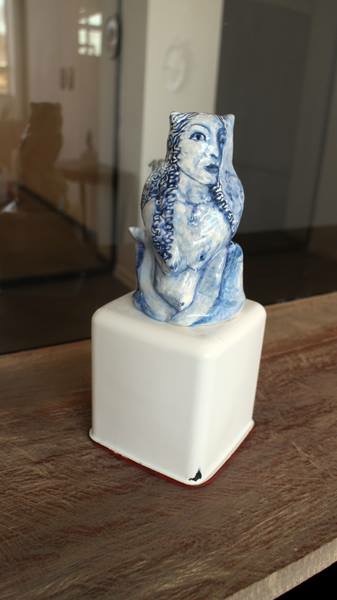 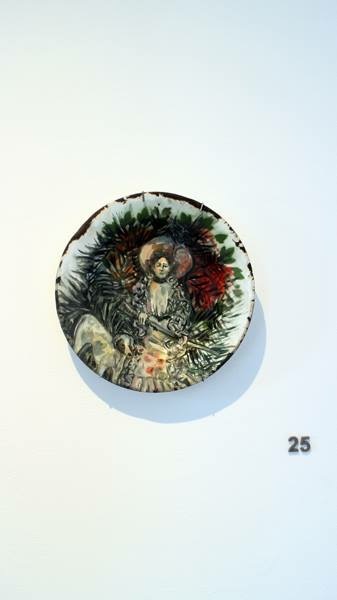 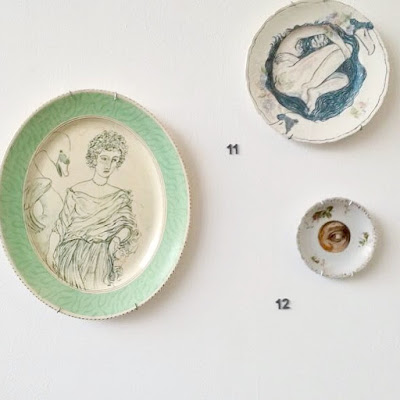 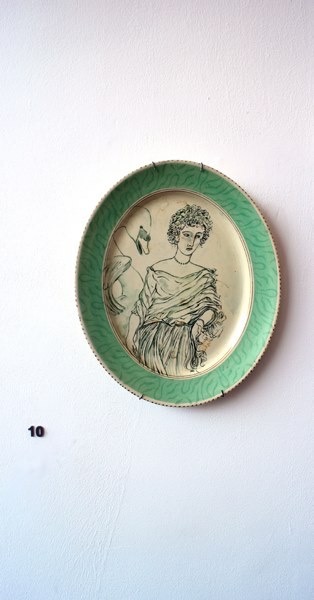 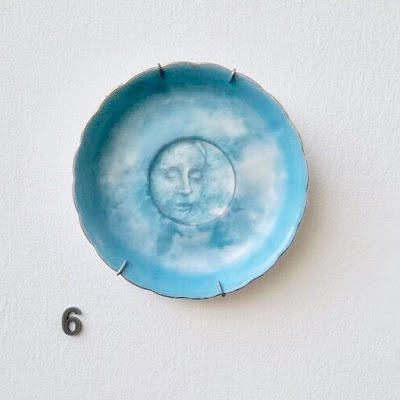 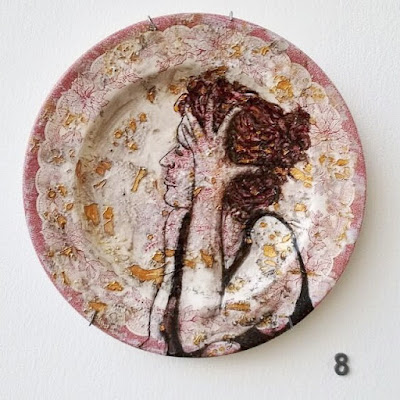 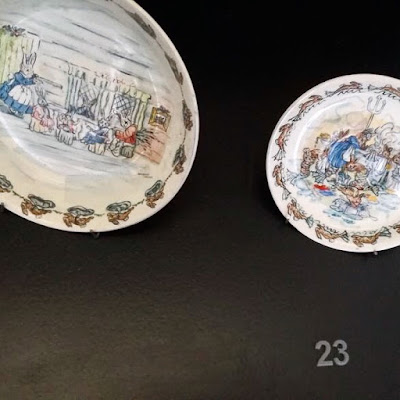 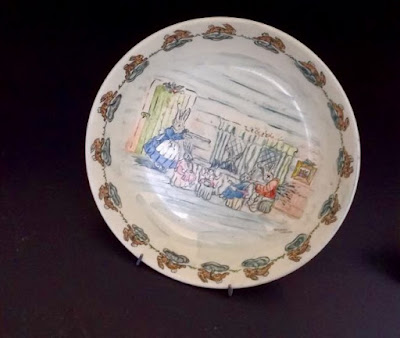 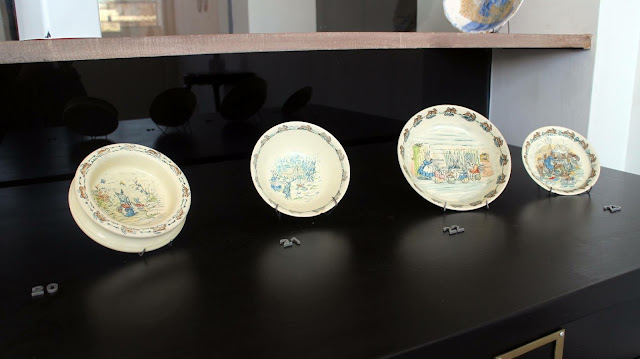 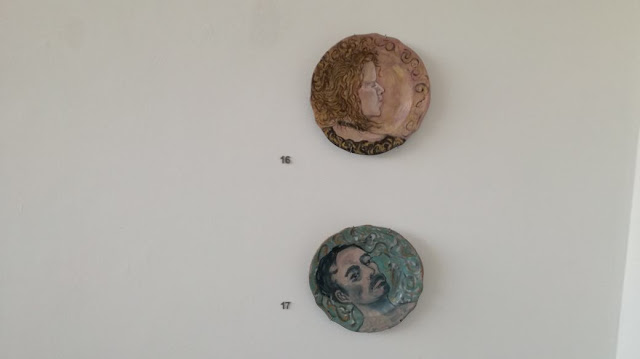 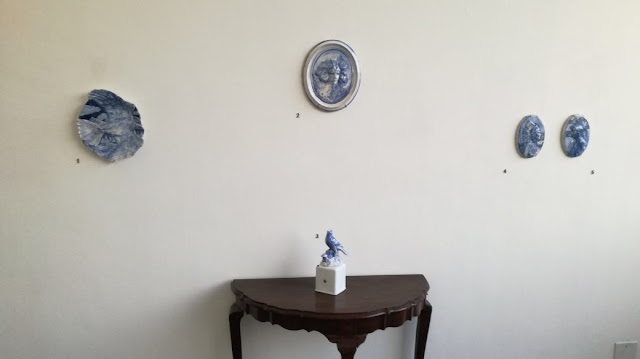 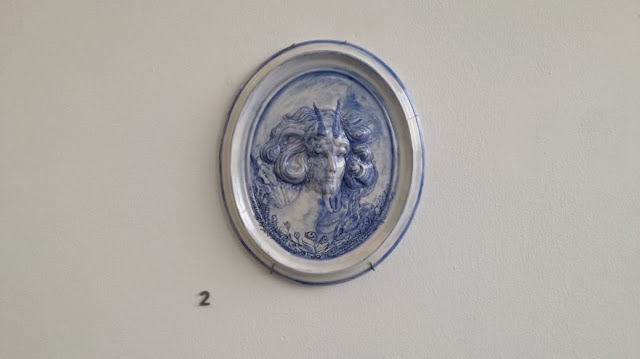 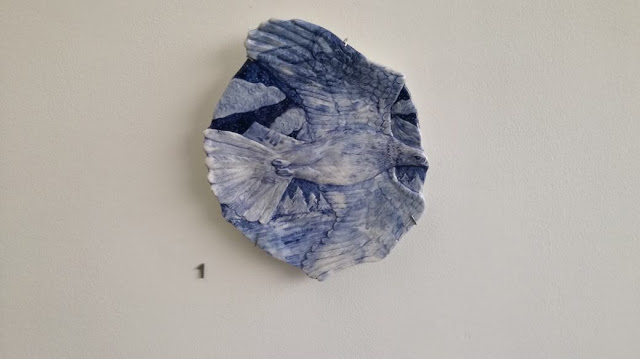 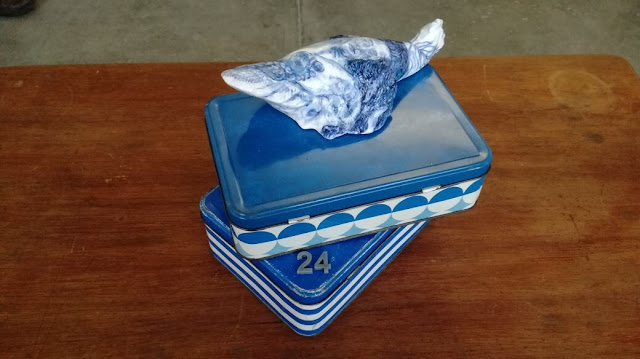 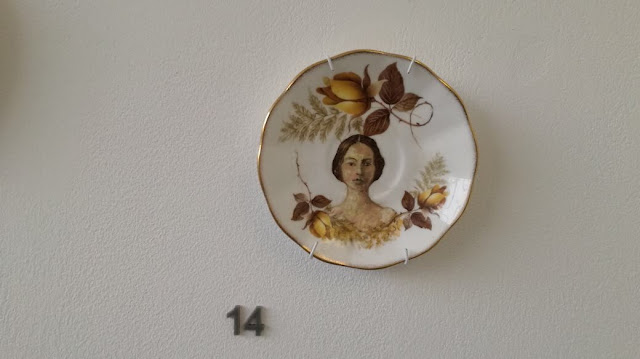 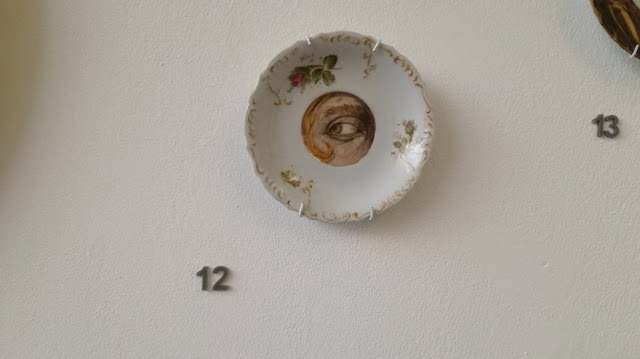 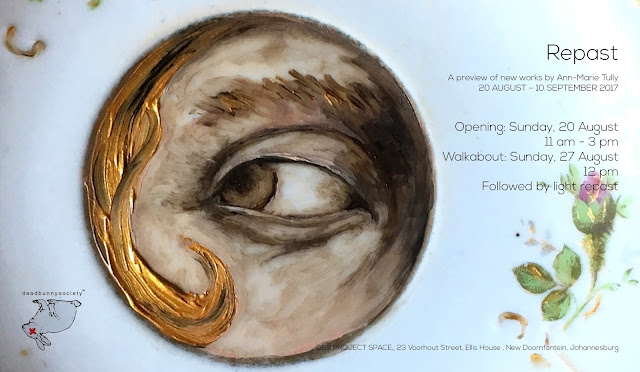 Posted by Ann-Marie Tully at 04:14 No comments:

Posted by Ann-Marie Tully at 04:13 No comments: