FACING THE CLIMATE
The Facing the Climate exhibition series combines climate-themed cartoons by five Swedish artists, with the climate-related artworks of artists in host countries: in this case five South African cartoonists join five Swedish cartoonists in taking a sharp look at the climate issue, with the aim of encouraging discussion about the sustainable society and heightening awareness of current environmental problems. Facing the Climate has been staged in a number of international contexts, with exhibitions taking place during 2012 in Rio, Athens, Tirana, Tel Aviv and Novosibirsk amongst other cities around the world. The Facing the Climate exhibition in South Africa is curated by Ann-Marie Tully in association with the Swedish Embassy of South Africa.
Facing the Climate is part of a concerted drive, conceptualised by the Swedish Institute, to promote critical sustainable development under the heading ‘Facing the Future – Sustainability the Swedish Way’. The impetus behind this began in December 2009 in relation to the Copenhagen Climate Conference, when a group of 25 Nordic newspaper cartoonists provided some amusing and alarming reflections on climate change. To illustrate Sweden’s active involvement in this area, the Swedish Institute developed the digital climate exhibition Facing the Climate in collaboration with the Swedish cartoonists/illustrators Magnus Bard, Helena Lindholm and Riber Hansson. For this exhibition, they are joined by Love Antell and Karin Sunvisson in commenting on the global climate dilemma. The South African cartoonists/illustrators involved in this project are Tony Grogan, Wilson Mgobhozi, Ree Treweek, Sifiso Yalo and Zapiro. 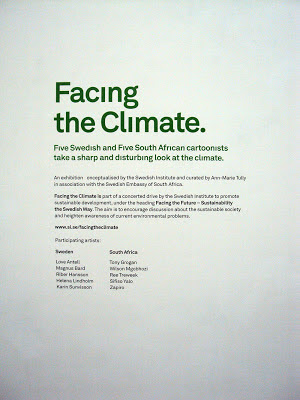 The Facing the Climate exhibition at NIROX projects was accompanied by the workshop:

Towards a Grass Roots Women's Movement around Climate Justice and Sustainable Development: An initiative of GenderCC South Africa in partnership with OXFAM and the Swedish Embassy of South Africa, 2 November 2012:
GenderCCSA and Oxfam hosted a one day dialogue session on the 2nd November with the aim of fostering a platform between government, business, academia and grassroots organizations, particularly rural women and small-scale farmers to engage with climate change concerns that are affecting women’s livelihoods. The workshop addressed the following issues: climate change adaptation and the role of grassroots women; the role of grassroots women in climate change mitigation; and the roll out of renewable energy and energy efficiency initiatives; how climate change will affect small-scale farmers and sustainable agriculture for adaptation; climate finance and how it can benefit grassroots women to mitigate and adapt to impacts of climate change.
If you are interested in finding out more about this workshop please contact Mrs. Dorah Marema (GenderCC Southern Africa – Women for Climate Justice):
Tel: +27 11 050 1343.
Email: dorah@gendercc.net
Web: www.gendercc.net 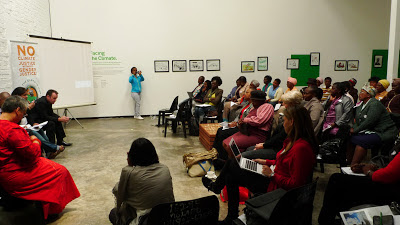 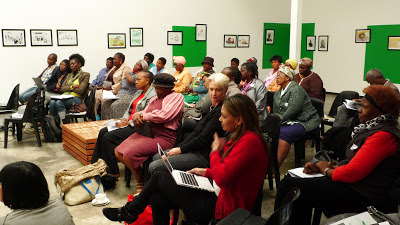 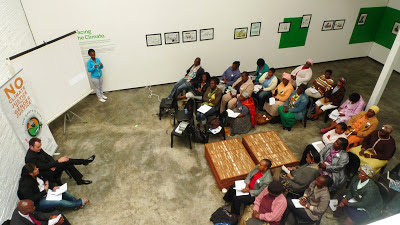 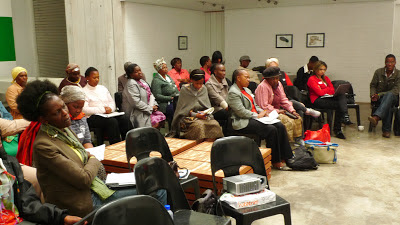 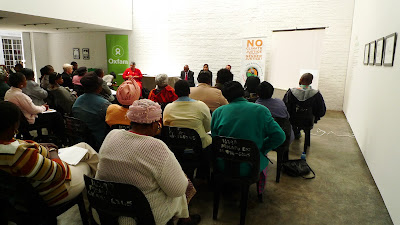 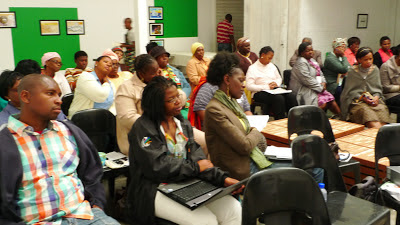 Facing the Climate opened its run at Michaelis Galleries on 28 September 2012 as part of the GIPCA Hot Water Symposium, before traveling to NIROXprojects in Johannesburg for exhibition from 28 October–19 November; culminating in a final exhibition at the Oliewenhuis Museum in Bloemfontein from 11 April–9 June 2013.


My paper 'The shamanic seam: transnatured humanities and sutured animal bodies in contemporary visual practice' was featured in the Pointure supplement edited by Leora Farber and I, and published in the December 2012 edition of Art South Africa. This publication following the Pointure exhibition and colloquium hosted by the University of Johannesburg in 2013. This pdf contains this and other fascinating articles that emerged from these events. Here follows my foreword for the supplement:

In pointing to a lace structure in the human experience, the Irish poet and scholar John O’ Donohue chooses an apt model for the frailty of the human interface with the eternal. He also gestures to an unexpected notion: that it is the ruptures in our lives, the openings, punctured, trimmed and mended, and at times raw, that are the most sublime. The recent Pointure exhibition and colloquium ‘laced’ together a poignant range of artworks and theoretical papers that relate to artistic acts of stitching and notional derivations of this material phenomenon. In these written theses and artworks, the acts of stitching, pricking, suturing, tearing, rupturing, cutting, embroidering, appliquéing, grafting, spinning and weaving, and a myriad of other incarnations of this practice of the ruptured mark, demonstrate and invoke the incisive, deconstructive, cathartic and prophetic energy of the ‘stitch’.

Derrida’s rhetorical formulation – pointure – is employed as a probing theoretical frame for this ‘weave’ of medium and metaphor. Pointure is a metaphoric device in Derrida’s 1978 essay ‘Restitutions of the truth in pointing [Pointure]’, ‘poking holes through’ and ‘lacing together’ Heidegger and Shapiro’s exploration of themes of presence in Vincent van Gogh’s painting, Oude Schòenen (Old Shoes). This mimetic word relates to printing in terms of the “small iron blade with a point, used to fix the page to be printed on to the tympan” as well as the “the hole which it makes in the paper”; and serves the figurative purpose of opening the text for critique. Pointure also references the practice of cobbling (in an intertextual gesture to van Gogh’s shoes) in relation to the ‘sewing together’ of the shoe, and the ‘drawing together’ action of the lacing-eyelets. In the context of the Pointure exhibition and colloquium, pointure is employed as a trope through which complexes of visual culture involving ‘pointured’ mediums and ‘pointured’ literary approaches may be critically framed. In this sense, pointure serves as a textu[r]al ‘loom’ for weaving together theory and practice, with the ease that one might lace a shoe.

This extended conception of pointure is here entwined (by unisex design) with Bracha Lichtenberg Ettinger’s intrauterine inspired matrixial theory – a “maternal-feminine” model for human discourse. In a leaning towards aesthetic application and revisionist thinking, matrixial theory and Derridian pointure share a common zeitgeist. Further to this Ettinger has also linked matrixial theory figuratively to the notion of weaving. In terms of the articulation of ‘pointure-type’ visual and textual practices, matrixial theory represents significant possibilities, as it allows for a complex ‘weave’ of subjectivities within visual representation and the ‘warp and weft’ of practice and being.

Posted by Ann-Marie Tully at 01:56 No comments:

See my video Stitching Desire (2003), which was selected to form part of The Global Skin (theglobalskin.org) a curated film project created by the Centre for Storytelling (centerforstorytelling.org) and the Dschoint Ventschr Film Production (dschointventschr.ch) in cooperation with the Zurich University of the Arts.

This project has collected short films/video pieces from around the world to be collated into a feature length film for cinema, on the broad thematic "People & Textile": about people, who either work with textiles or have a strong relation with them. Christian Frei, Patrizio di Renzo, Pipilotti Rist and Bernard Senn were the jurors.

Posted by Ann-Marie Tully at 01:13 No comments: