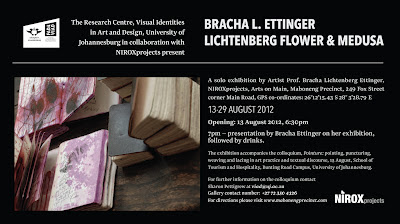 LICHTENBURG FLOWER MEDUSA
A solo exhibition by Artist Professor Bracha Lichtenberg Ettinger
NIROXprojects Gallery, Arts on , Maboneng Precinct,
cnr Main road, .
13-29 August 2012
The exhibition opens 13 August at 18h30, with a presentation by Professor Ettinger at 19h00pm on her artworks. The exhibition runs till . Lichtenberg Flower and Medusa is curated by Leora Farber and Ann-Marie Tully.


This exhibition accompanies the colloquium, Pointure: Pointing, Puncturing, Weaving and Lacing in Art Practice and Textual Discourse, convened by the Research Centre, Visual Identities in Art and Design, Faculty of Art, Design and Architecture, . The colloquium takes place on at the and Hospitality, , where Prof. Ettinger will present a keynote address. The colloquium and exhibition of Professor Ettinger’s artwork is accompanied by the exhibition entitled Pointure at the University of Johannesburg Gallery, curated by Ann-Marie Tully and Jennifer Kopping (8-29 August).

Bracha Lichtenberg Ettinger is a prominent Israeli/French/British visual artist who divides her time between Paris and Tel Aviv. She holds the Marcel Duchamp Chair and is a Professor of Psychoanalysis and Art at the , Saas-Fee. Ettinger is also a senior clinical psychologist, a practicing psychoanalyst, and a theoretician working at the juncture between feminine sexuality, psychoanalysis, and aesthetics. Her enmeshed theoretical and artistic practice has made a significant impact in the fields of art, film, and literary studies, as well as psychoanalysis, queer, and gender studies. In her 'matrixial' theory and language, Ettinger extends upon the work of contemporary philosophers and psychoanalysts such as Emmanuel Levinas, Jean-Francois Lyotard, Gilles Deleuze, Félix Guattari and Jacques Lacan; and, although she is associated with contemporary French psychoanalytical feminism, in her work, she challenges Julia Kristeva’s and Luce Irigaray’s abject formulation of the feminine, rearticulating this maligned genus as a model for thought and discourse. As artist/psychoanalyst and artist/philosopher, Ettinger is an author of numerous articles and books on psychoanalysis, aesthetics and ethics, including the seminal volume The matrixial borderspace (collected essays from 1994 to 1999 with introductions by Judith Butler, Griselda Pollock and Brian Massumi, , 2006).

Her art practice reflects an engagement with the articulation of the ‘proto-ethical’ potential of art, her re-thinking of subjectivity and feminine difference, artworking and art's object, beauty and sublimity. Ettinger’s art practice is primarily as a painter, working in an interdisciplinary manner that incorporates oil-painting, drawing, photography, poetic notebooks, writing-drawing, conversation, lecturing-performances and encounter-events. Her figural-abstract paintings, artist’s notebooks and other artistic works have had a significant influence on global contemporary art, art criticism and art history over the past decade. Two books dedicated to her artwork, namely Art as compassion. Bracha L. Ettinger (eds. Catherine de Zegher & Griselda Pollock) and Le cabinet de Bracha (ed. Patrick le Nouene) were published in 2011.

Ettinger has held solo exhibitions at MoMA, (1993); , (1995); Palais des Beaux-arts, (2000); the Drawing Center, New York (2001); the , (2009); the Musée des Fundació Antoni Tàpies, (2010); Beaux-Arts d'Angers (2011) and Casco, (2012). Recent performance/installation and lecturing ‘encounter-events’ have taken place at the , Berlin (2010), Poznańskie Towarzystwo Przykaciół Nauk, Poznań (2011) and the Arts Nova Museum, Turku (2011). She has participated in major international group exhibitions including Feminine Presence (Tel Aviv Museum, 1990); Face a L’Histoire (Centre Pompidou, Paris, 1996); Kabinet (Stedelijk Museum, Amsterdam, 1997); Inside the Visible (, Boston, Whitechapel, London and Art Gallery of Western Australia, Perth, 1996-1997); Aletheia (Konstmuseum, Göteborg, 2003); ARS 06 Biennale (KIASMA, Helsinki, 2006) and Gorge(1) (The Royal Museum of Fine Arts, Antwerp, 2006-2007).
This exhibition provides a fascinating insight into Ettinger’s pioneering and composite practice, through a selection of artworks in diverse media, ranging from drawings produced from 1987 to 1981; paintings dating from 2004 to 2009; a recent range of drawings (2010-2012) and a series of artist’s notebooks produced during the years 2003 to 2012. These artworks embody a porous and rich terrain of aesthetic and theoretical devices: notions of trace and inscription in the face of digital anonymity; the interplay of mechanisation and mark (“reprographic” means), staged alongside the iconography of ghostly and traumatic apparitions “becoming” effaced and palempsestual; the detritus of the unconscious, the prosaic, the unsightly and the unvalourised subject; the notebook as an intersection between the analyst/artist and the residual dialogue with an[Other]; the employment of the photographic image/object as a ground that is diluted through process to that of a fading spectre; a sense of disembodied relational aesthetics where classical distance and intimacy implode.[1] Ettinger’s luminous paintings mine the physics of light and colour, a liminal terrain where the insubstantial force becomes a rendered and allegorical gesture.[2]
A recent essay by Nicolas Bourriaud reflecting on Ettinger’s oeuvre entitled, Bracha Ettinger: figures of out-off (Hors) (2012) will be available at the exhibition.