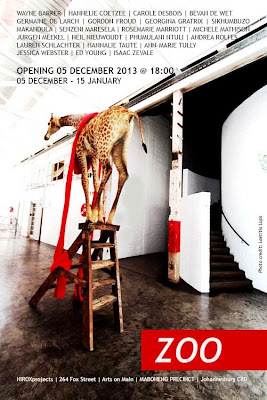 DATES: Opening Thursday 5 December 2013 @ 18:00.
Closing 15 January 2014.
Please note that the exhibition will be closed over the Christmas and New Year period.

EXHIBITION CONCEPT/BRIEF: This group exhibition gathers together a group of established and emerging artists whose artwork relates in theme/manner/medium to Lauren Beukes’ Arthur C Clarke award-winning novel, Zoo City (2011). This text frames Johannesburg as the seedy science fiction setting for a long tale (tail) where a criminal underclass and their animal companions live in a magical and hellish reality. In Zoo City Beukes has mobilised to great effect the entwined literal and metaphoric understanding of the English word “Zoo”:

A park-like area where live animals are kept in cages and enclosures, studied, bred, and exhibited to the public. Formal term zoological garden
[shortened from zoological gardens (originally applied to those in London)].

A place, activity, or group marked by chaos, strange, or unrestrained behaviour.

Beukes’ text also draws on the “touristy” association of Johannesburg with wild animals (as a gateway to game farms etc.); and one of the largest vibrant and complex cities in Africa and the Southern Hemisphere.

This group exhibition extends on the dualism of the word “zoo”, drawing together artworks that respond to urban and wild animals; the “human zoo” of identity, activity and discourse; human interactions with nature and animals; spaces and sites of control, coercion and contravention; urbanity and nature binaries; human and animal dialectics and amalgams; technology/reason and instinct juxtapositions; the historical context of the zoo as a colonial invention and “benign” theme park that instrumentalises the imperial project of control, and display is also of interest:

‘Their [zoo animals] dependence and isolation have conditioned their responses so that they treat any event that takes place around them – usually it is in front of them, where the public is – as marginal. Hence their assumption of an otherwise exclusively human attitude – indifference.’

‘Everywhere animals disappear. In zoos they constitute the living monument to their own disappearance. And in doing so, they provoke their last metaphor. The Naked Ape, The Human Zoo, are titles of world bestsellers. In these books the zoologist, Desmond Morris, proposes that the unnatural behavior of animals in captivity can help us to understand, accept, and overcome the stresses involved in living in consumer societies”.

‘All sites of enforced marginalisiation – ghettos, shanty towns, prisons, madhouses, concentration camps – have something in common with zoos’

Neil Nieuwoudt is a curator and artist. Working as professional curator in the industry since 2008 in Cape Town (UCA Gallery). In June 2012 he started as curator/ project manager at NIROXprojects, Arts on Main, Johannesburg CBD.

Neil’s work has also been selected for two independently curated books of international
poets and visual artists: http://www.blurb.com/b/3683608-estuary-a-confluence-of-art-poetry (Winner of the 2013 Saboteur Award for Best Mixed Anthology; with the second book being released later in the year (2013). His work primarily deals with notions of subjectivism, symbolism and he employs the accident or the random in his creations.


Ann-Marie Tully is an artist, curator, and writer who obtained her Master of Fine Arts degree at the University of the Witwatersrand in 2003. She has exhibited widely and is represented in collections. Her art practice is as a painter, also working with mediums such as textiles and ceramics. Ann-Marie’s most recent solo exhibition Wolf in Sheep’s Clothing debuted at NIROXprojects in 2013. Wolf in Sheep’s Clothing travels to the North West University Galleries in 2014, and to the Oliewenhuis Museum in 2015.

Ann-Marie’s research and art-making is concerned with the rhetorical and reductive representation of non-human creatures, ancient and contemporary narratives of human 'culture' and the 'natural world'. Themes of mortality and the trace character of photographic media are also themes revisited in her work.