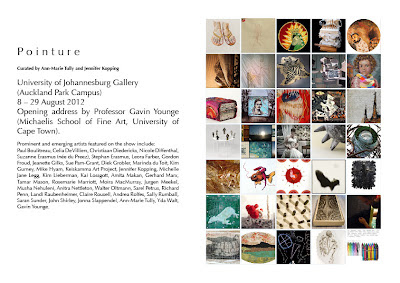 
In his 1978 article, ‘Restitutions of the truth in pointing [pointure]’ Jacques Derrida explores his prevailing discursive theme of the inside and the outside of a text in relation to Heidegger’s Origin of the Work of Art, a philosophical exploration of etymological themes of presence in application to Vincent Van Gogh’s painting, Oude Schòenen (Old Shoes) (Payne 1993:220-221). ‘Restitutions’ operates through a set of metaphors: Pointure is a key metaphor relating to printing in terms of the “small iron blade with a point, used to fix the page to be printed on to the tympan”, as well as the “the hole which it makes in the paper” (Payne 1993:228). Derrida (cited in Payne 1993:228) also links the practice of shoemaking with the term Pointure, referring to the stitching-together of the shoe. In his characteristic way of remarkable connections, Derrida ties this term to the act of reading paintings and in-so-doing mobilises a trinity of sub-metaphors: the word lace is the first of these, referring to the lacing of a shoe − Michael Payne (citing Derrida 1993:229) notes that language punctures the canvas, less like a knife and more in the manner of lacing a shoe. Derrida’s ‘Restitutions’ does not miss a further understanding in the word lace. The French word for lace is le lacet, which can also mean trap or snare (Payne 1993: 229). In this sense Van Gogh’s empty shoes with open laces represent an empty trap, a vacuum of presence to delve into – where only ghosts can be found. Ghost is then the last metaphor in ‘Restitutions’. Notions of dispossession, melancholia, unrequited desire, loss, longing and absence spring from this textual ectoplasm.


This exhibition draw together established and emerging contemporary South African artists, whose artworks express thematically and in their inherent material and creation, notions relating to pointure (lace, trap and ghost). The curators undertake to create visibility for an expansive and under explored area of art practice in including but not limited to media involved with stitching, suturing, puncturing, printing and weaving; and to do so in a manner that situates this work within the discourse of contemporary art and cultural theory.

The Pointure exhibition is also accompanied by a colloquium in August 2012 of the same name (hosted by the Visual Identities in Art and Design Research Centre at the University of Johannesburg) with keynote presentations from Bracha Ettinger, Jane Taylor and Meredith Jones. 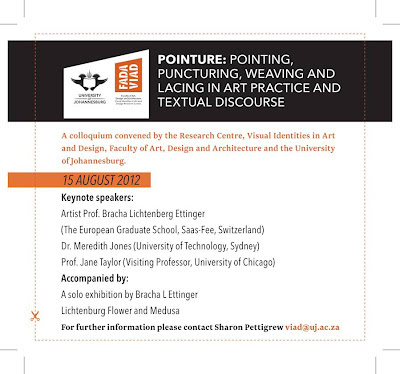